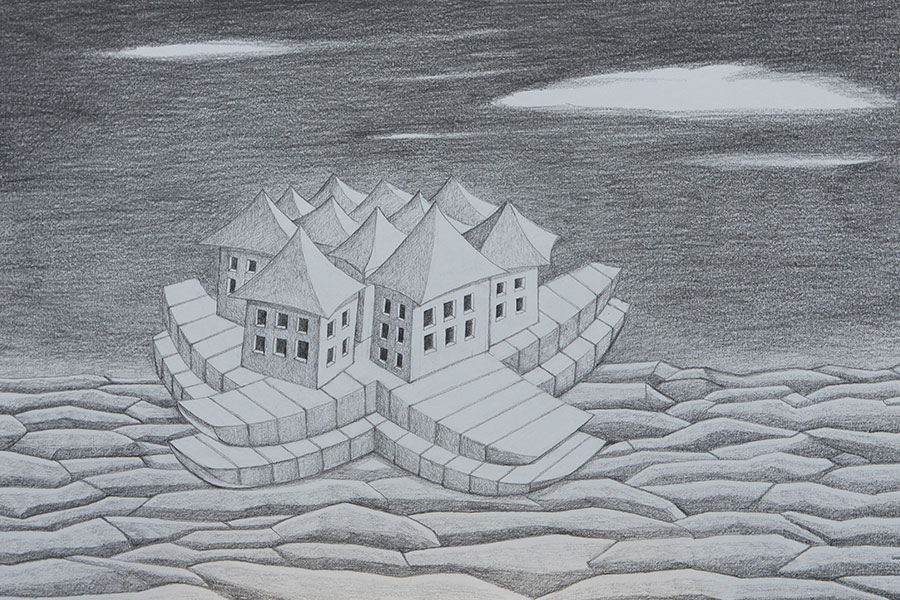 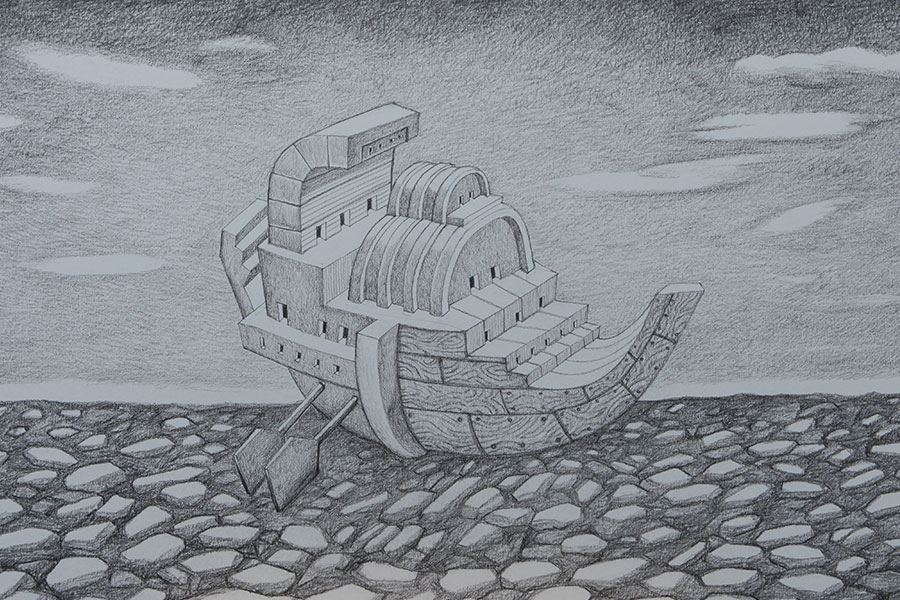 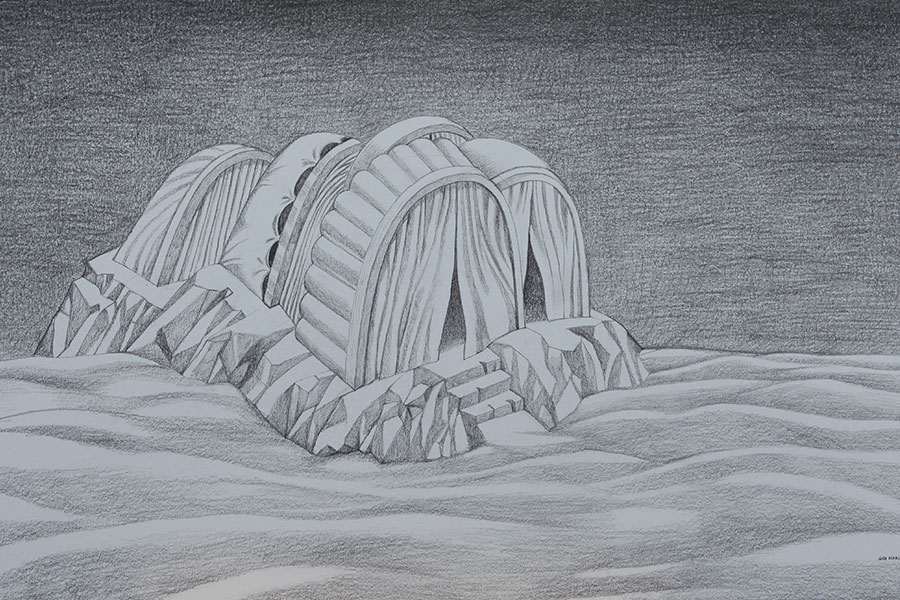 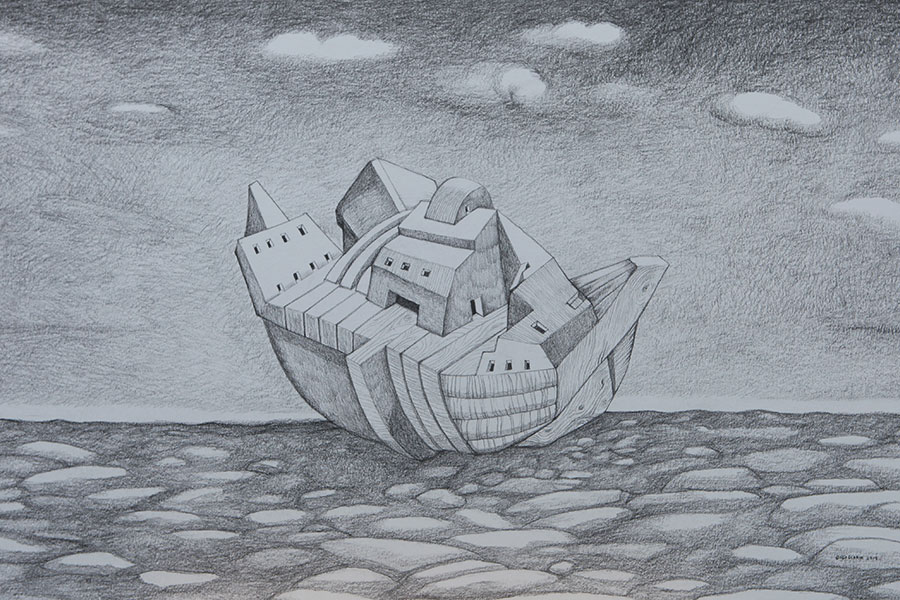 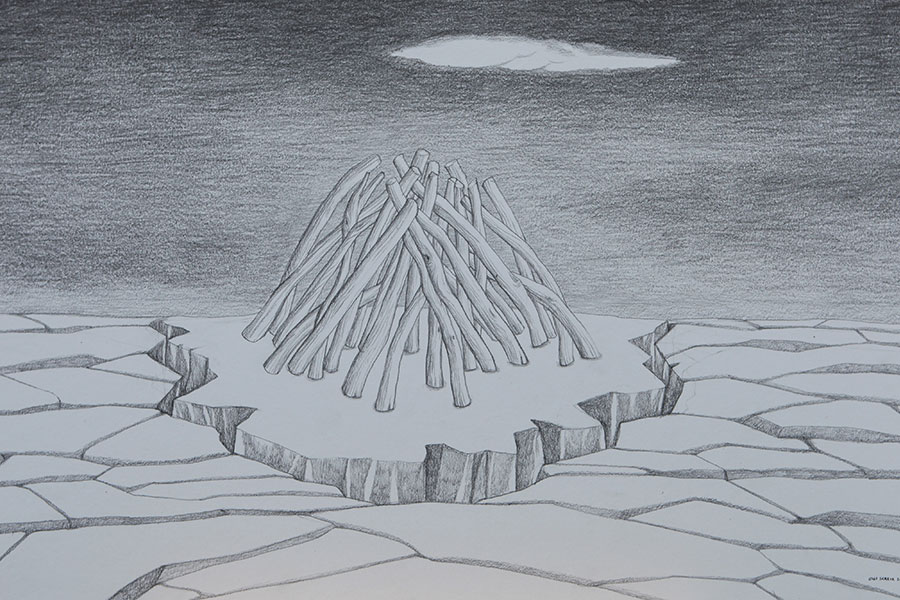 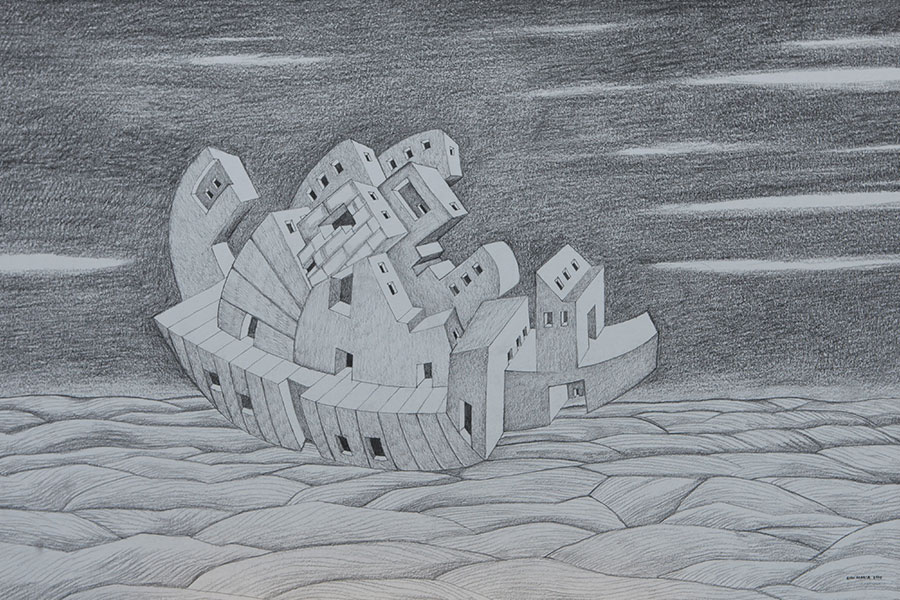 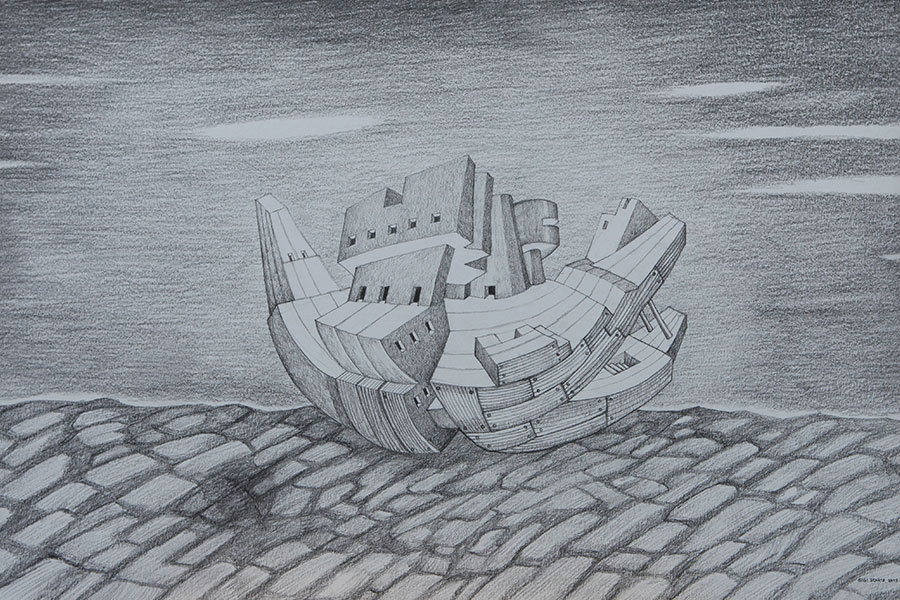 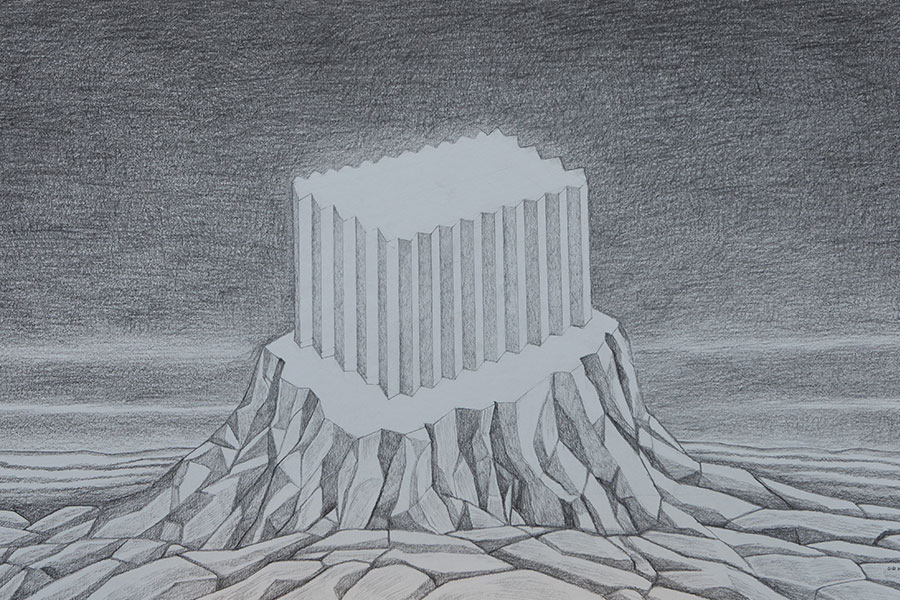 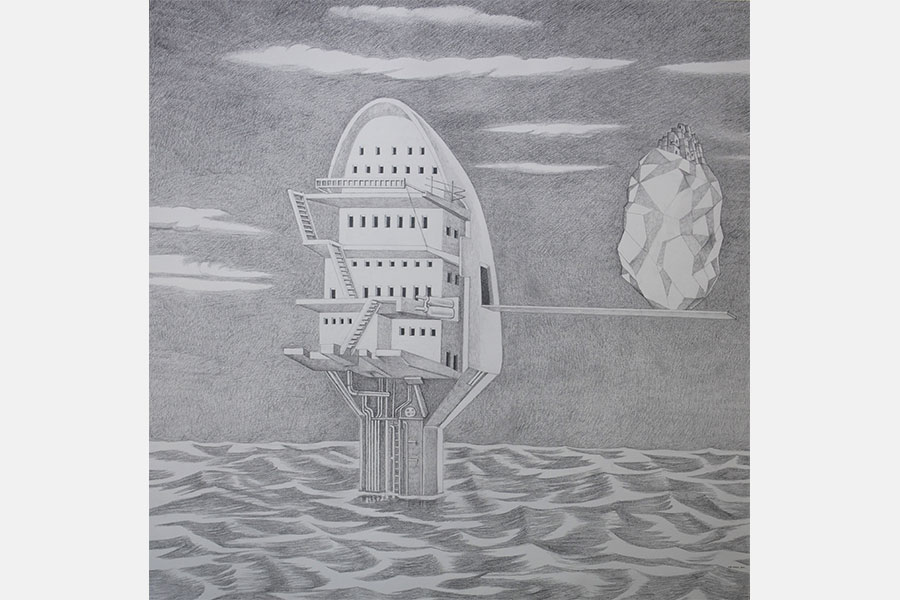 in search of a mountain 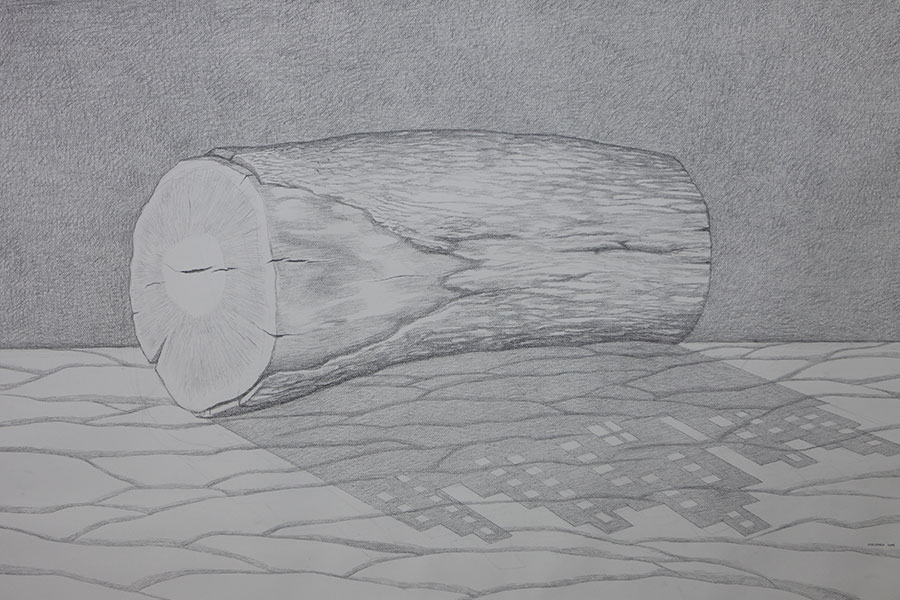 Shadow of the ancestors 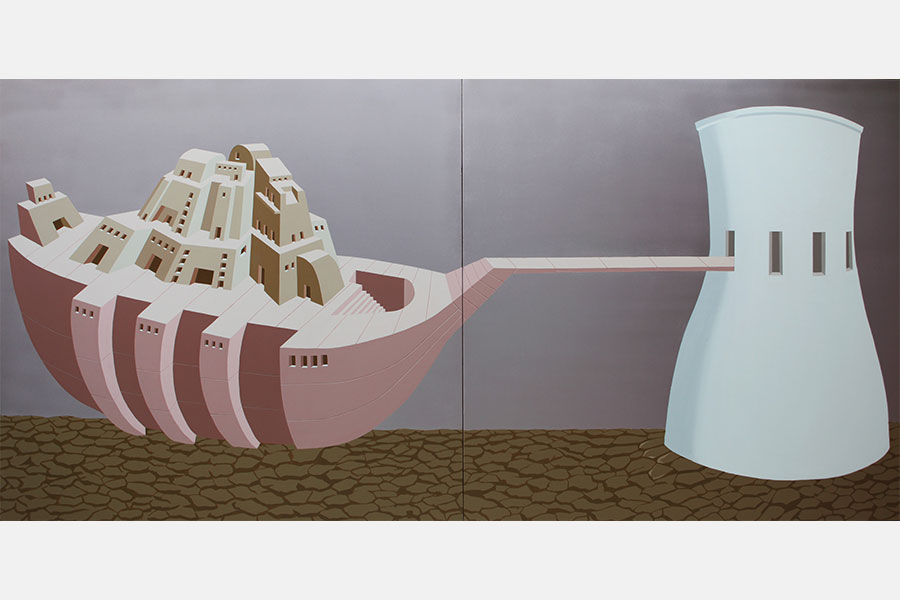 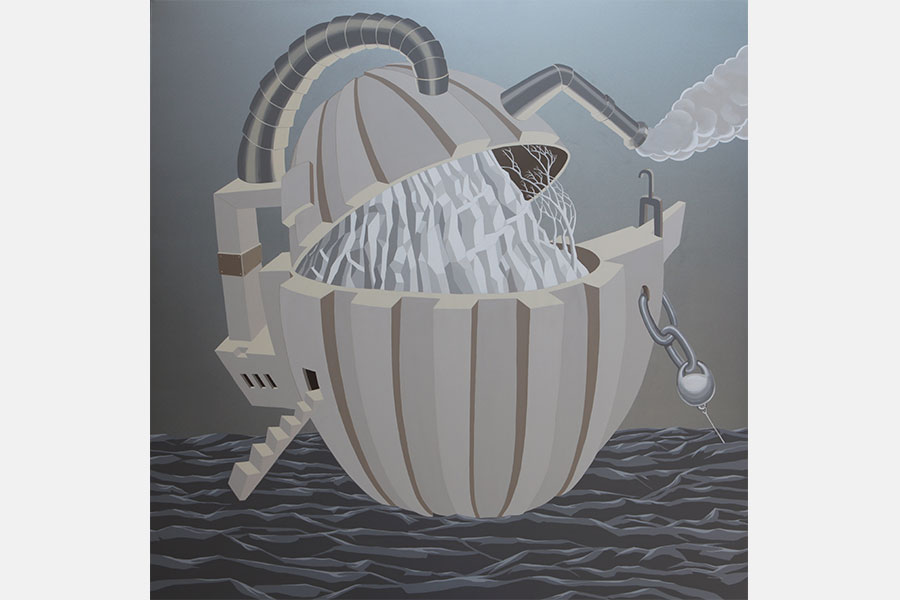 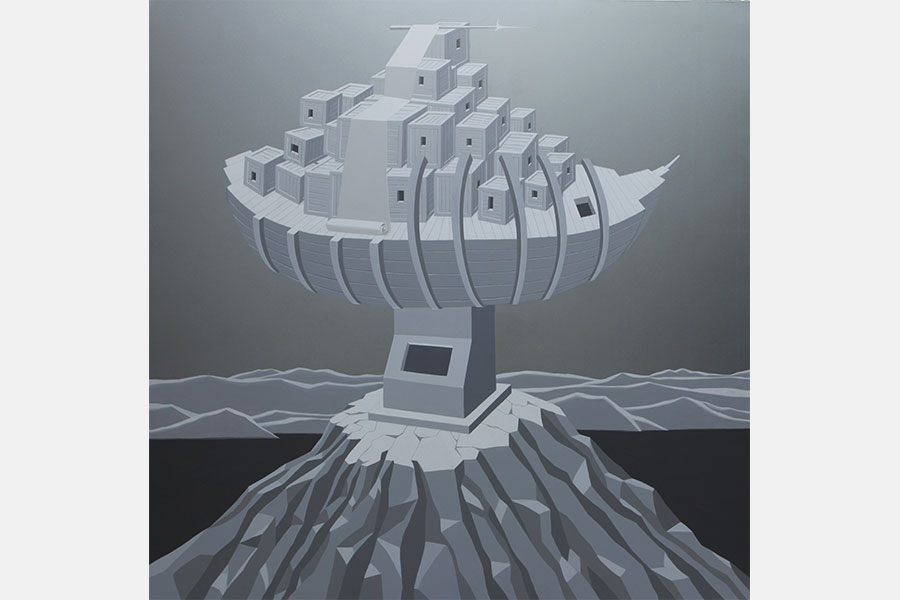 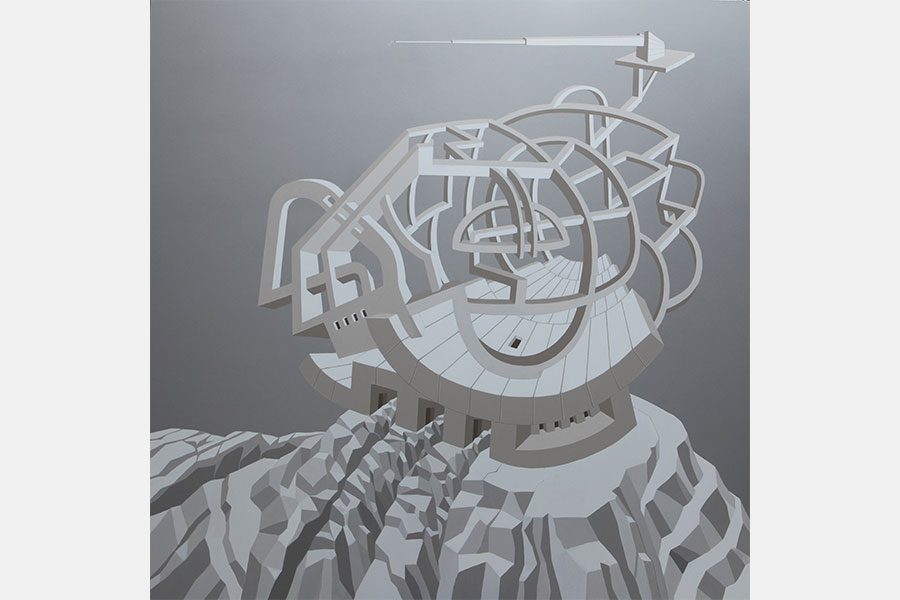 Gigi Scaria's work intervenes at the tension created as the world heads towards an apocalypse due to many disturbances – climatic, geographical and human. According to him, Noah’s Ark represents the phoenix of new beginnings arising from this complete destruction.

An apocalypse is coming onto us; our world and the worlds before.

According to Gigi Scaria, climate change and subsequent territorial disputes have the potential to tear the social fabric of humanity. His work intervenes at the juncture of this apocalypse as explores this fantastical Biblical devastation. As the steps of a new beginning take place with The Ark, Gigi, like Noah, takes stock of humanity. The boat of humanity, in ‘The Ark’ (image above) is connected to what he envisions as an atomic nuclear plant. The subsequent video journeys through the food on an assembly strip, which transports itself like the broken parts of a whole.

For many, this may allude to the food packet distribution in refugee camps, which find their way in Gigi’s video work titled ‘Expanded’(image below). Painstakingly mapped, these vast stretches of refugee settlements across history seamlessly come together as a mass landscape of interim solution, or maybe, habit. Be it Auschwitz, in Nazi Germany, Darfur in Sudan or Syria today. Gigi forces one to question how one can leave their sanctuaries, their ‘habitats’ and come out of them. He wonders what everyone’s personal ‘Ark’ looks like? Gigi’s Ark is in the shape of a boat, a boat that was not meant to ‘sail’, that came back to where it was.

For Gigi, the habitat keeps you safe in the middle of a desert or a storm and it will keep you safe even after The End. Incidentally, Gigi learnt about a pristine piece of nature untouched by civilization in Norway, called the Bouvet Island, which according to him is the modern day sanctuary. For Gigi, the seed to build anew after Doomsday lies in itself. This symbiotic nature finds itself in Gigis’s thoughts – he believes that in every thinking person lays the seed to build their own habitat, their own sanctuary. His graphite drawings (images above) are different structures that could be a part of the same Ark – and the different plateaus and platforms that are encountered by the Ark.

His monochrome palette wishes to pull the viewer in, and help them connect their personal journeys to the present with the geographical journey the ark manifests itself in. Whilst wandering in libraries, Gigi would connect with his immediate present. He wants to create that very ambience for those engaging with his work. Many strands of ancient traditions record the Mountains of Ararat as the place where Noah came to rest his ark after the Flood. According to Gigi’s childhood understanding, these allude to the mountains in Iraq from where The Ark set off. It is indeed ironic that archaeology records one of the earliest civilizations at Ur and Uruk in Mesopotamia, which is modern day Iraq. Today, they have been destroyed beyond recognition, a horror from which humanity cannot redeem itself. ‘And for what’ , Gigi questions.

He weaves in another ongoing territorial conflict, that of Palestine and Israel. From the time of the Torah, everyone claims that land as their own, in their perspective of the story. He wants to bring these tensions of territory, culture and ownership and wants the audience to confront the importance of present day geography. He wonders where the fine line lies between the religious mythology and the reality. For Gigi, the animation video work(images above) follows the paintings. ‘Interior/Exterior’ and ‘The Ark’ are set on the ground in the Ararath mountains. He captures the natural elements, mountains, oceans, the earth – some of which bear the abuse of industrialization.

The animated video work, Voyage, bears the weight of history in its overflowing white scroll. It marks the names of all those who were transported as slaves, for example from British India and those who migrated from conflict zones, like the refugee ships from Syria. Sadly it is still relevant today, as bodies wash up on those shores where refuge is being sought.

These scrolls mark what we are capable of, of salvation and complete destruction.

The many layers of The Ark represent an abode, which was never meant to set sail, but provide sanctuary as the world reaches The End. The Ark manifests in itself the ‘habitat’, which is the lone shelter from the devastation yet to occur and its solution as well.

All thoughts expressed are the authors own, after a phone conversation with Gigi Scaria on 29/9/15.