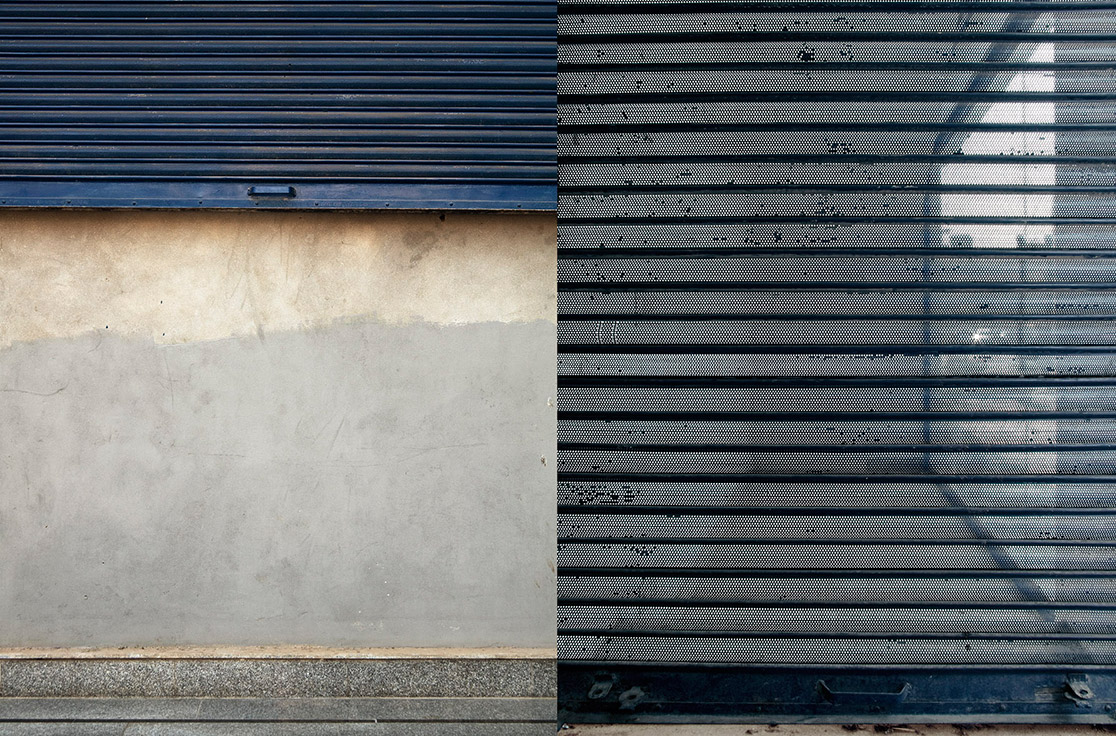 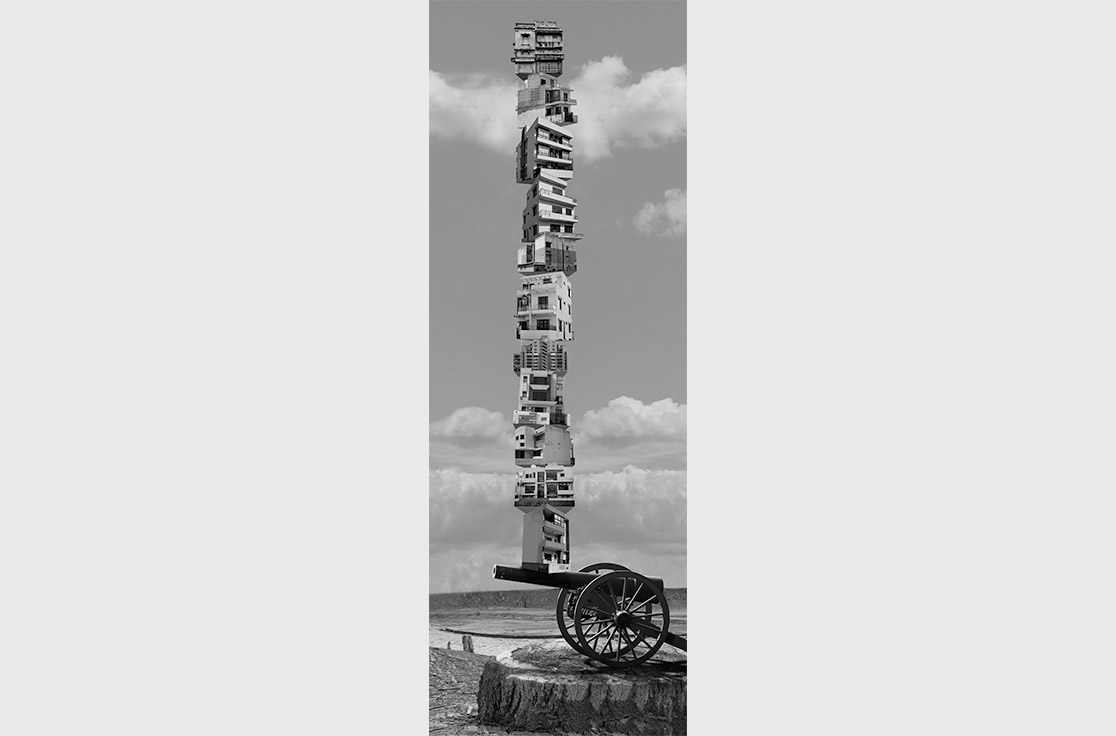 Puzzled yet undaunted
Invasion and resistance are the two phenomenon as old as human civilisation. These are in fact two sides of the same coin.

When we toss the coin most of the time we witness one side of it as coin lands on the ground. It could be a site devastated by the invaders or pushed back constantly by the people who resist them. Linear history most of the time played the character of the one who wins or the one who loses, which means coin was always flat on the ground showing either the winner or the loser. But the present time shows a third view of the situation where one is witnessing the coin stuck on the ground straight without falling on either side. There is an attempt of invasion and resistance in such a way that coin stands motionless. World is no more a playground of the innocent victims and powerful oppressors. Rather it has started showing the symptom of a puzzled existence of the invaders as well the oppressed. A complex phenomenon in which every attack has its own counter attack built within.

Puzzled yet undaunted
World is no more a playground of the innocent victims and powerful oppressors. Rather it has started showing the symptom of a puzzled existence of the invaders as well the oppressed. A complex phenomenon in which every attack has its own counter attack built within. 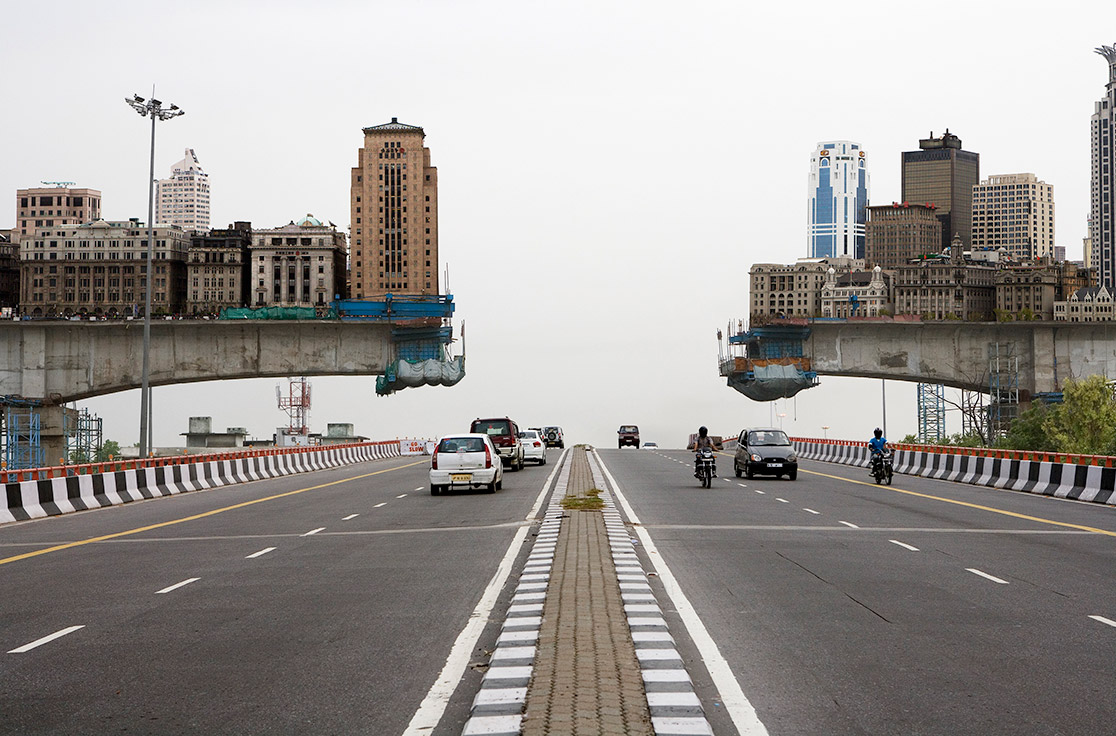 This is a digitally manipulated photograph where the image sources are from two different places. A construction site along the road is a single photograph taken from Delhi’s Ring road and the building set in a row is taken from Shanghai, China.

The image talks about the aspirations of a fast developing economy like India, who’s desperate attempt is to equate itself to a country like China which has become far more developed in its infrastructure. 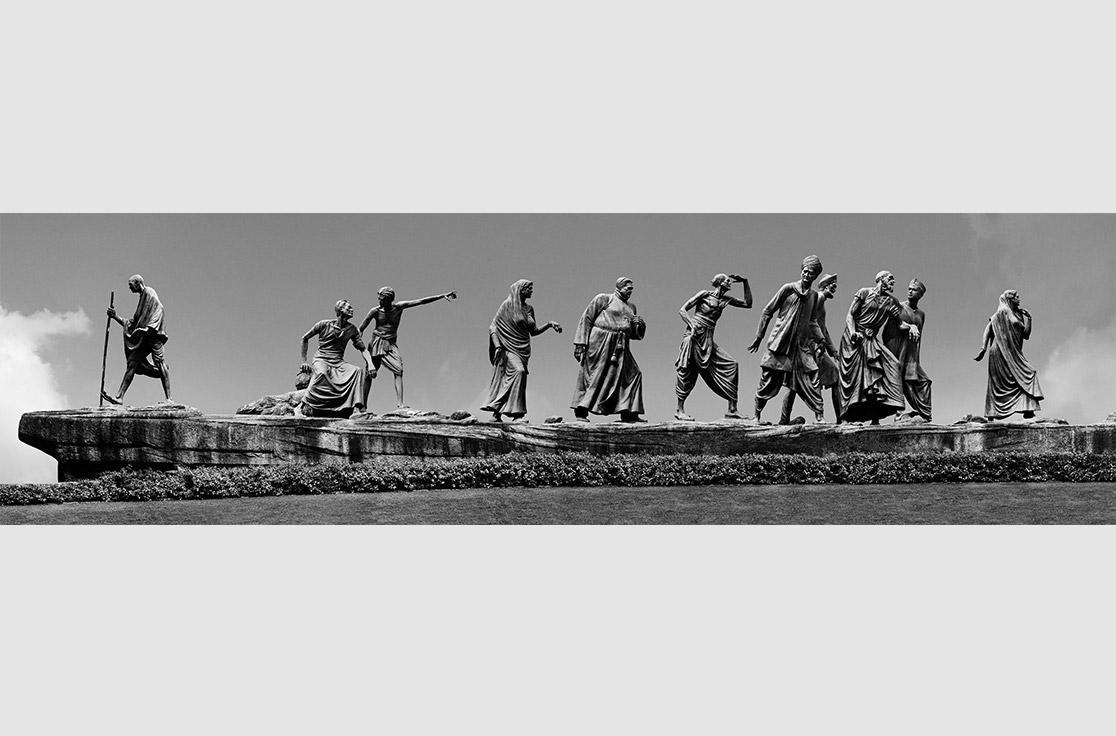 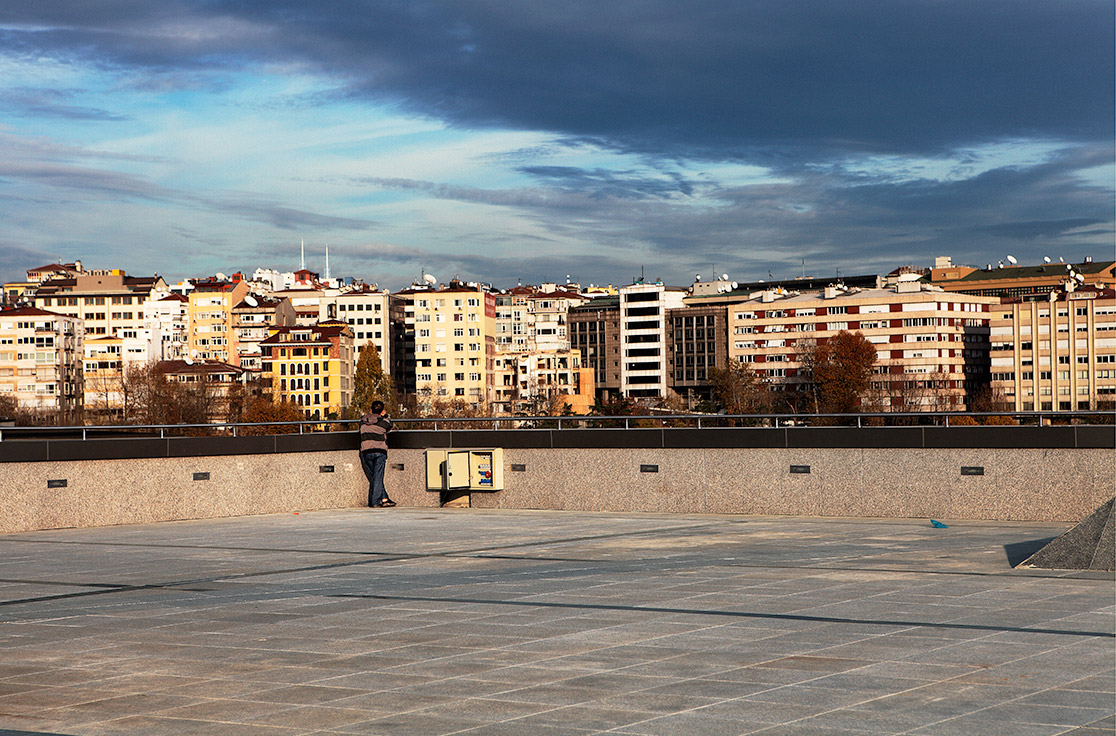 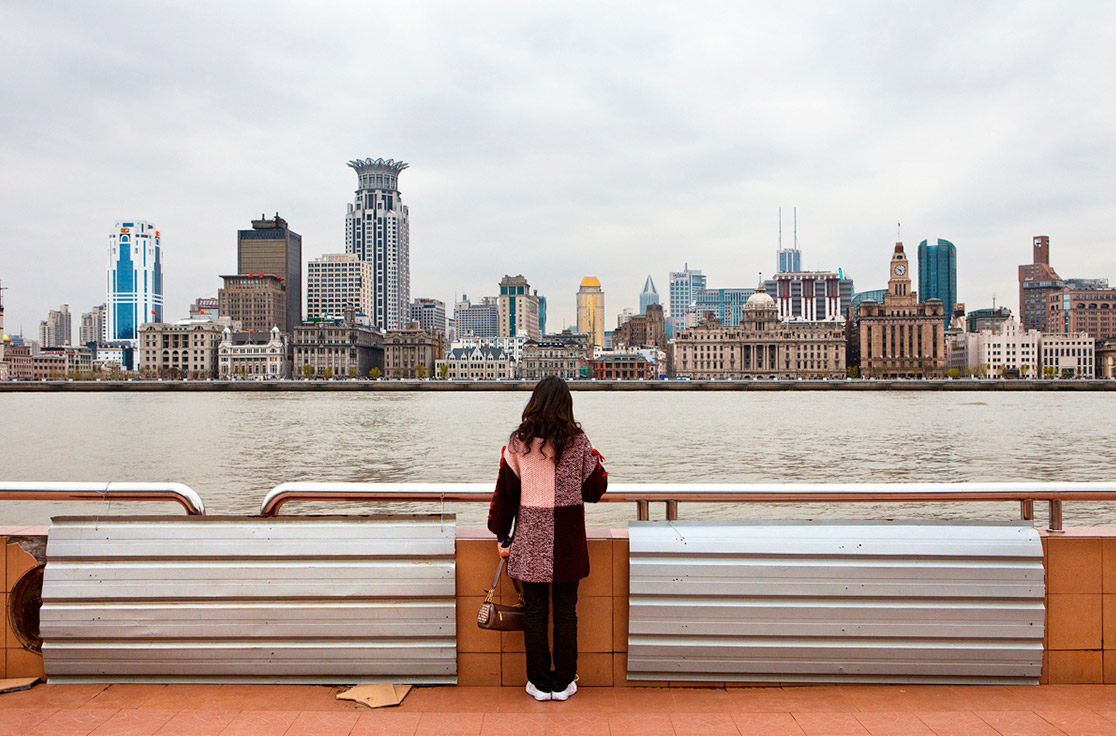 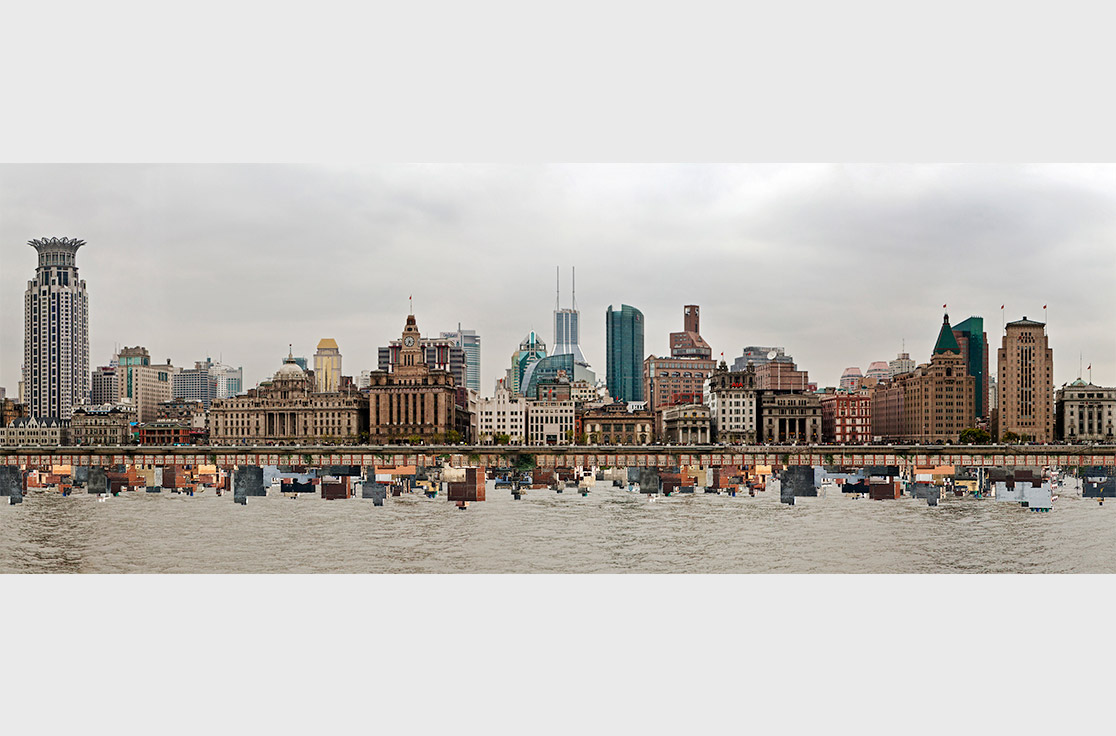 Tele Mandir is made out of hundreds of still images taken from the popular Indian spiritual /religious channels. The structure of the temple is modeled on a very famous newly constructed temple situated in south Delhi.

Many spiritual channels in India seems to have replaced the idea of a temple with their 24/7 television programs. 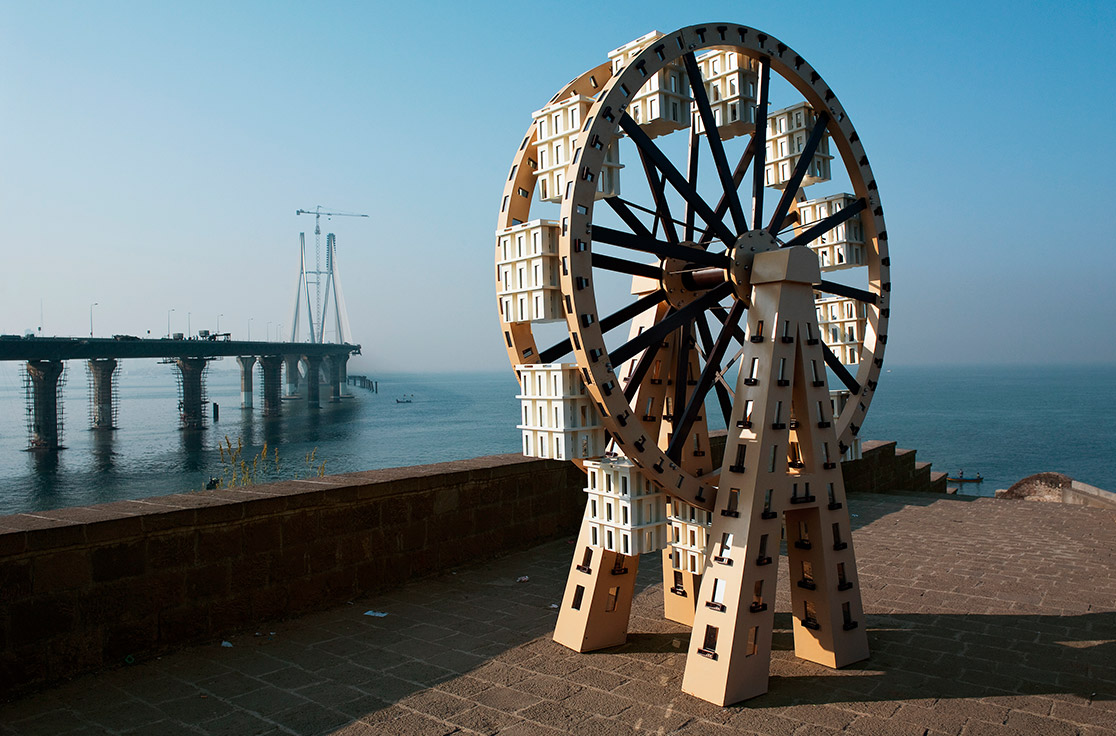 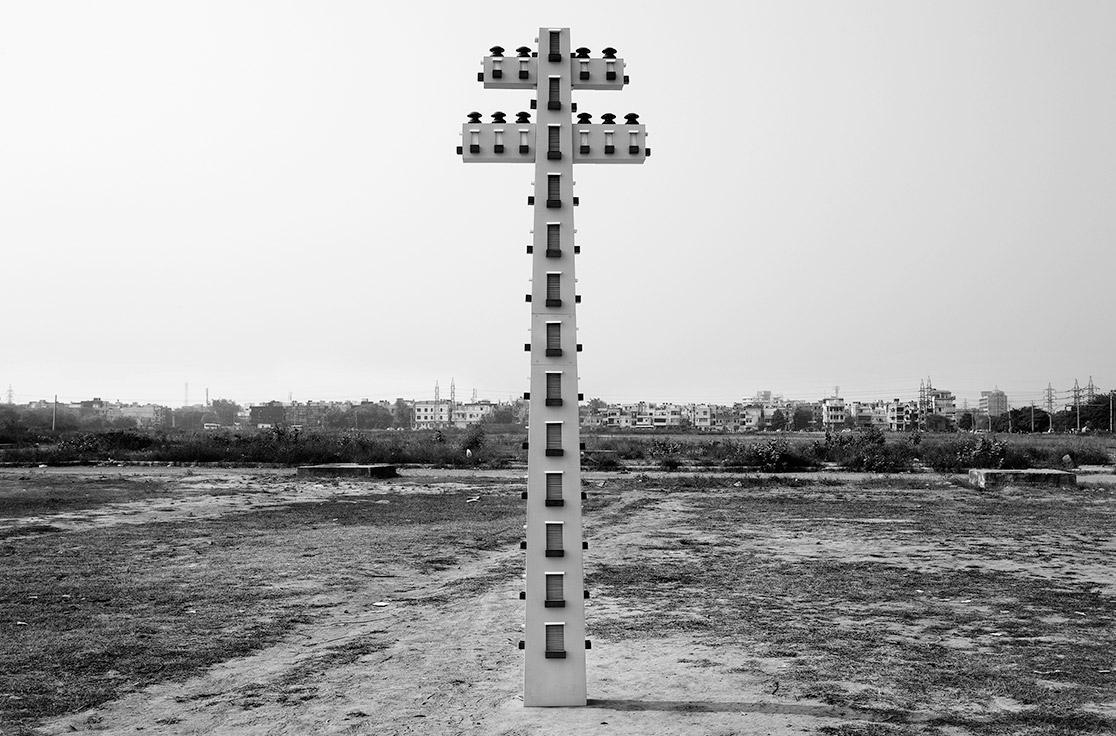 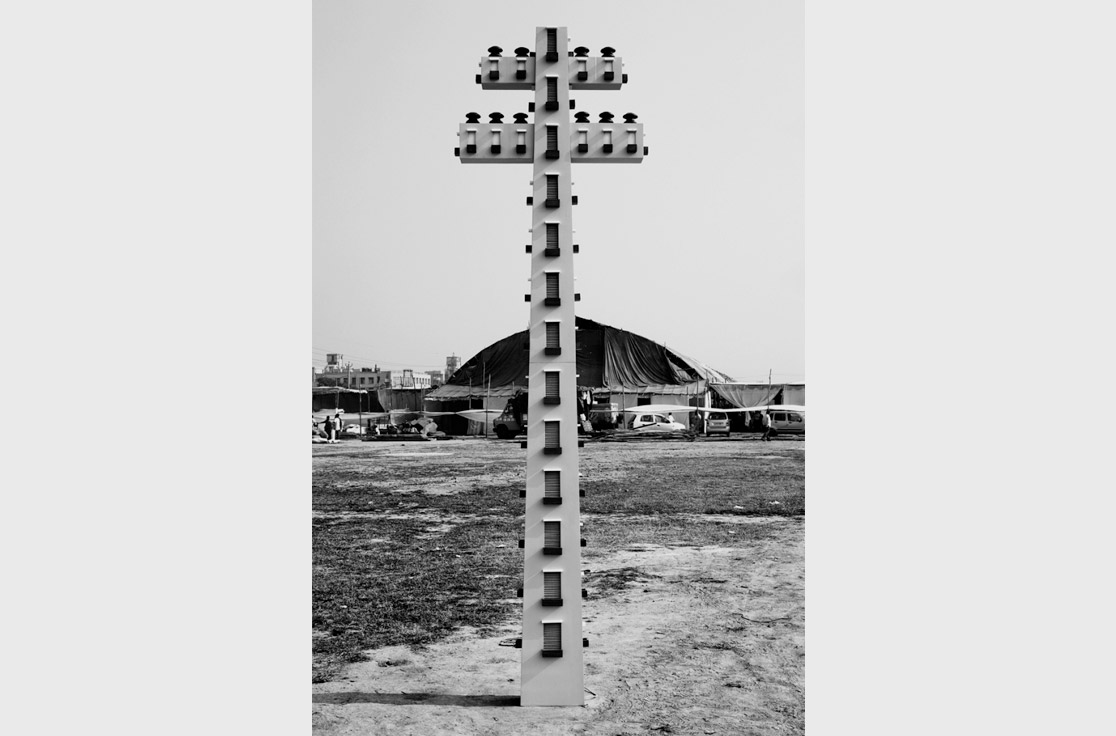 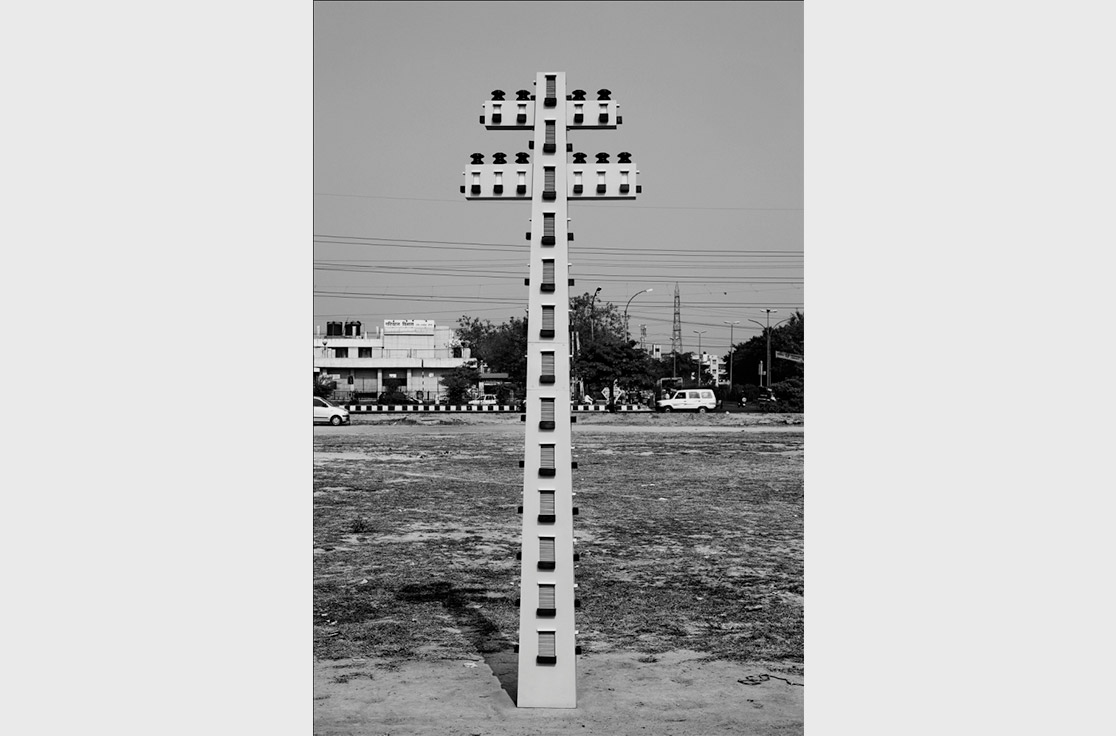 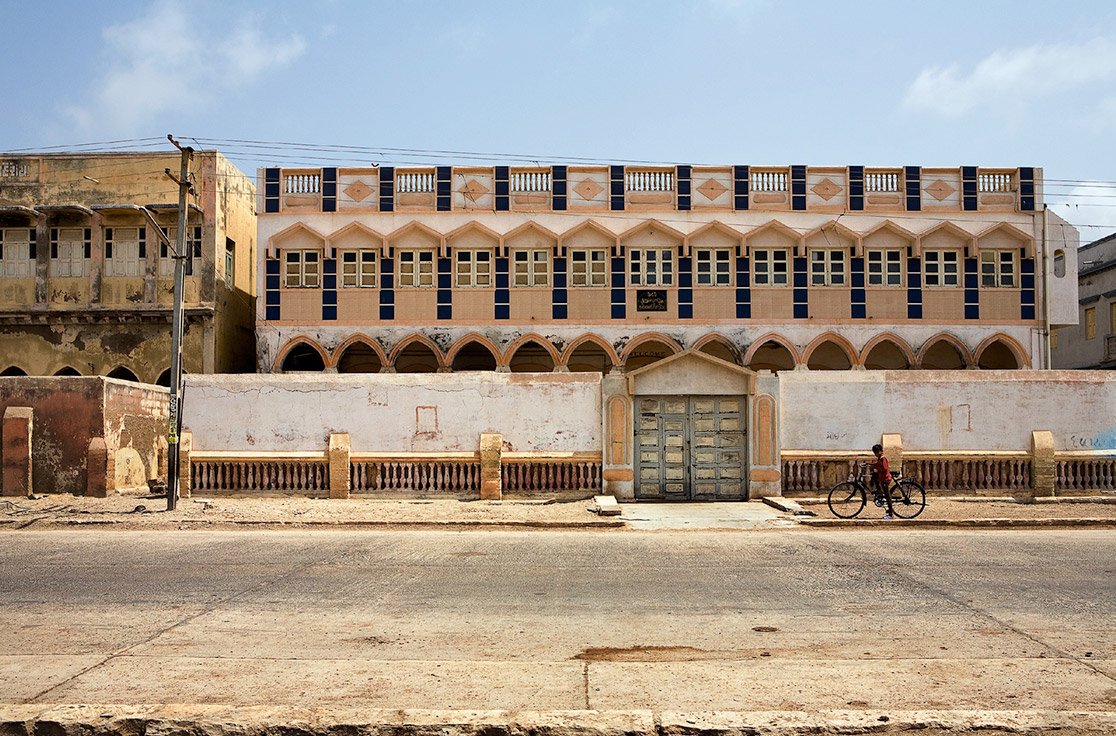 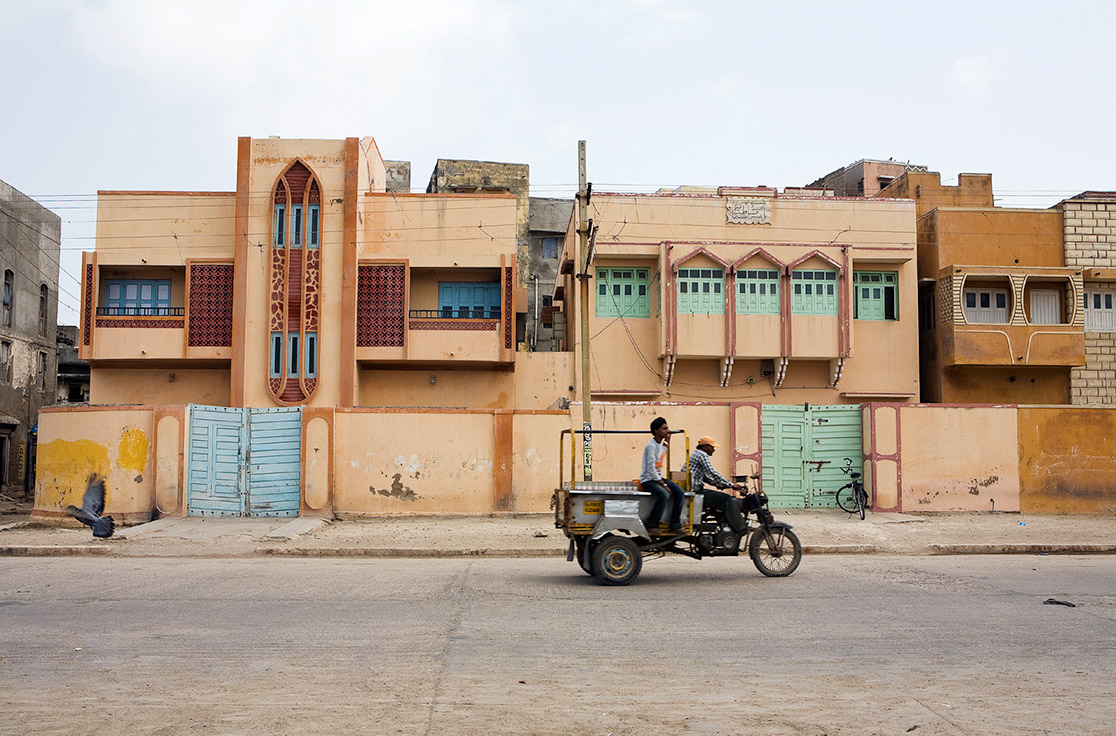 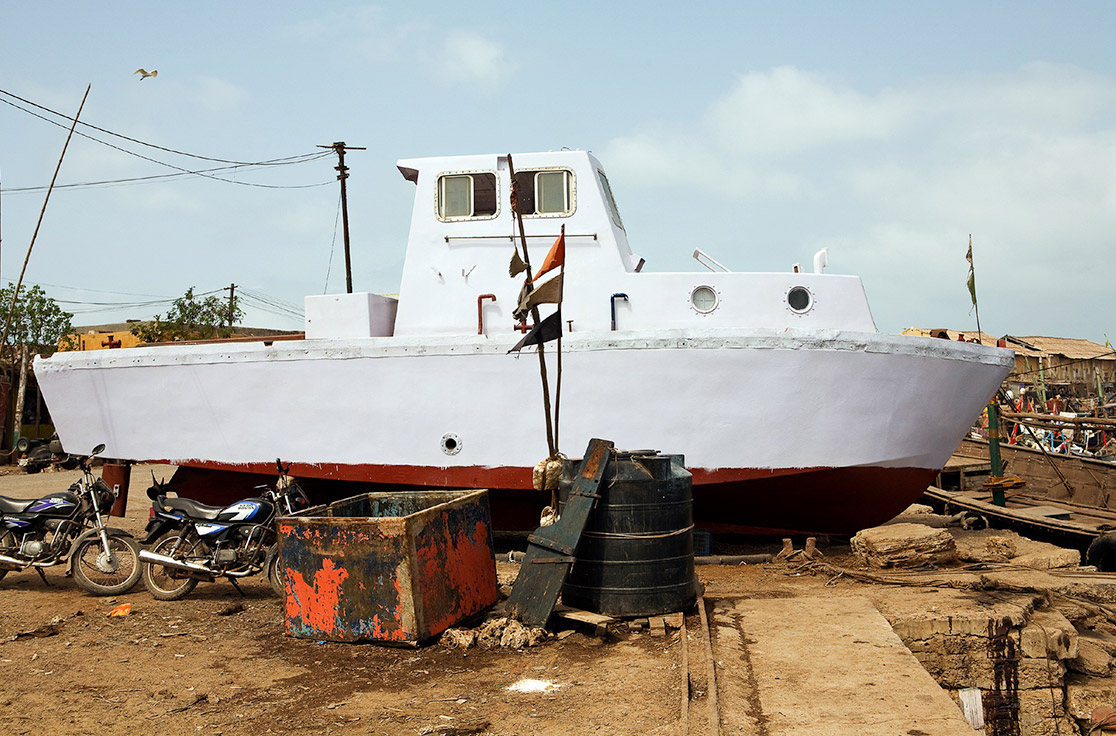 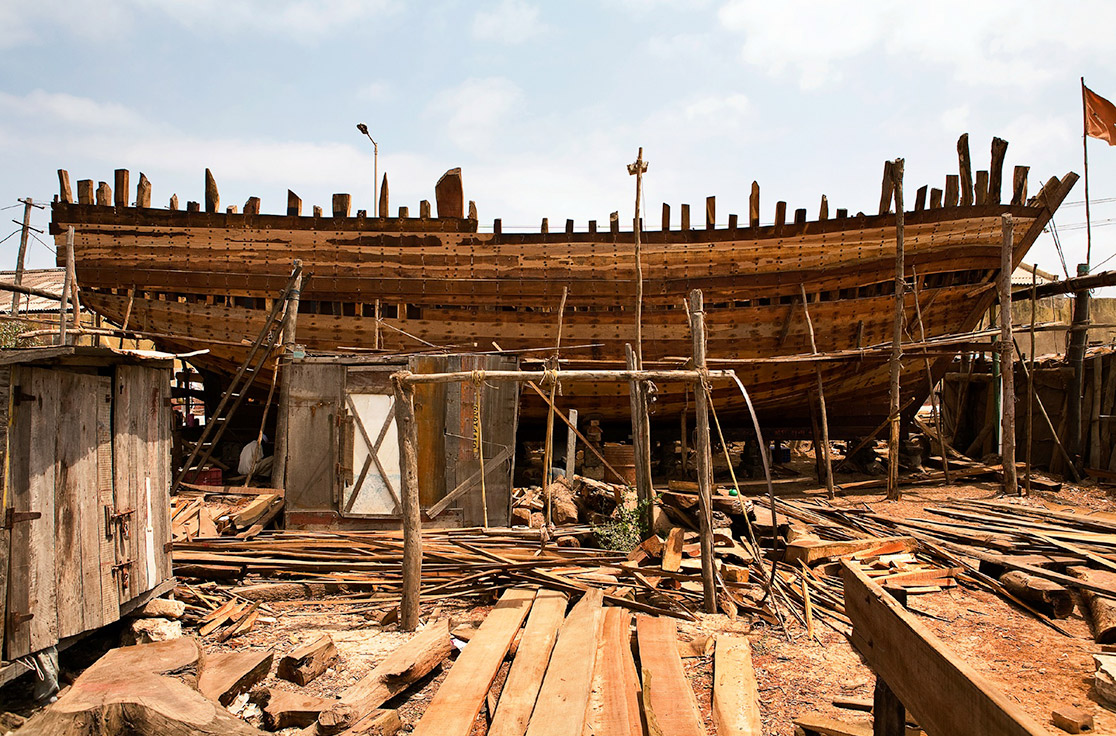 Space, history and its’ present dichotomy

I always wanted to visit places in India which have made important political sketches of the Indian subcontinent. Places associated with Mahatma Gandhi spread across thousands of miles of the nation. His presence felt by thousands of little villages as well as in towns and cities all over India. But when I look at places which have historical importance with individual action and its psychological forces, my ‘social memory’ directs me towards three important places which shaped the life of a man whose conscience had become the nation’s conscience, Porbander ,Dandi and Sabarmati.

I arrived at Dandi on 1st May 2008. From Baroda to Dandi is a four hours drive. I saw the place where Gandhi had picked up the salt from the shore. I visited the house in which Gandhi stayed for almost 22 days till he was arrested. I saw the tree under which the last meeting was held before making salt. I saw the vessel in which the salt was prepared. Surprisingly I noticed that the sea moved away from that place almost half kilometer ahead.

I came back to Baroda that night and went to Ahmadabad next morning. From Ahmmadabad to Porbendar was eight hours long trip. I reached there at 10 o’clock night.

Gandhi’s house Kirtimandir was situated almost at one end of the main street close to a square where a marble statue of Gandhi was placed. The house is maintained very well although there were rumors that it nearly collapsed during the earth quack in 2001. I went in and climbed up the small steep staircase with the help of a rope hanging from the ceiling. I walked around the tiny rooms and imagined about the person who never showed any academic brilliance or spark of genius during his childhood. I came out and walked on the street and got the hang of a medieval port city. The buildings, architecture and the broad roads, all stood against the present time but at the same time not fully merged into the historical past a past which gave birth to a hero of the 20th century. I walked along the long wall constructed between the sea and the road which connects the entire length of the port. I took a right turn from a gate and entered into a stunning site of thousands of fishing boats. The site was of mixed feelings. Poor workers, contaminated sea waters, polluted air, half constructed boats, wrecked and abandoned boats, colorful flags, heat, wood dust all stood in front of me with an infinite line marked till the horizon.

I was searching for the presence of Gandhi whose child hood was spent in the narrow alleys in this city. But I felt Porbander has always stood like this for centuries. It really doesn’t matter to the city who was born here and who is dead. Perhaps this is the character of many places in the world. Individual efforts merge into the social memory and that social memory survives only in the individual self without leaving a mark at the place where the individual’s effort is made. Does Gandhi remain as an undaunted social memory where his own ideas about change dissipate in the thin air of the place in which he was born?

I left for Ahmdabad that night and reached there in the morning. Sabarmati Ashram was lively with people and nature. I went inside the house in which most of the political decisions regarding India were made for more than a decade. I spent hours inside and out side the building. It is a simple house with thatched roof and tiles on top. But the house looks really big with a solid structure. It reminded me the body of Gandhi, his broad shoulders and strong features. Unlike Porbendar in Sabarmati I felt the social memory catching up with the present time. I observed hundreds of visitors walk around the house and spending time inside the airy rooms and the little backyard. Sabarmati ashram stood in front of me as a metaphor of political consciousness of this country. And at the same time it also demands a fresh reading in its historical context. Gandhi left this house on 12th March 1930 with 79 Ashramits to Dandi, recalling Buddha’s renunciation, with a vow not to return to this place till freedom of India is achieved. And the history proved that he never returned to Sabarmati. The determination of leaving this place was for Gandhi as important as the intention of making it.

A series of Porbander photographs and a five minutes video of Gandhi’s house in Sabarmati was the result of this trip. 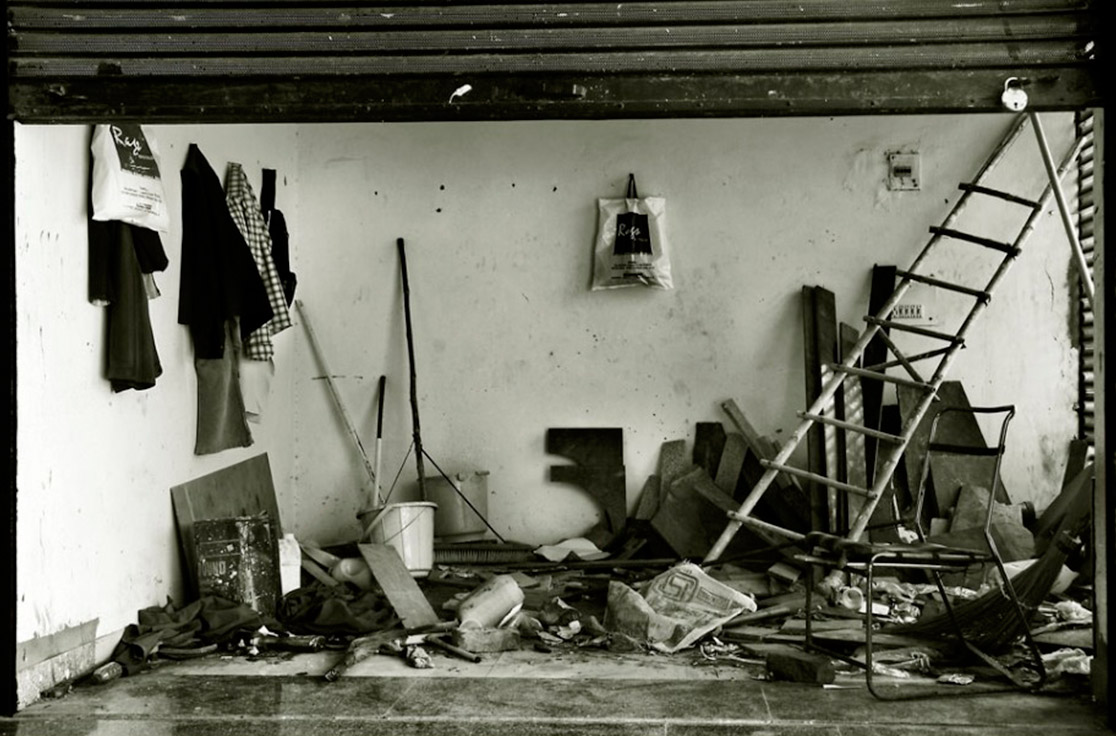 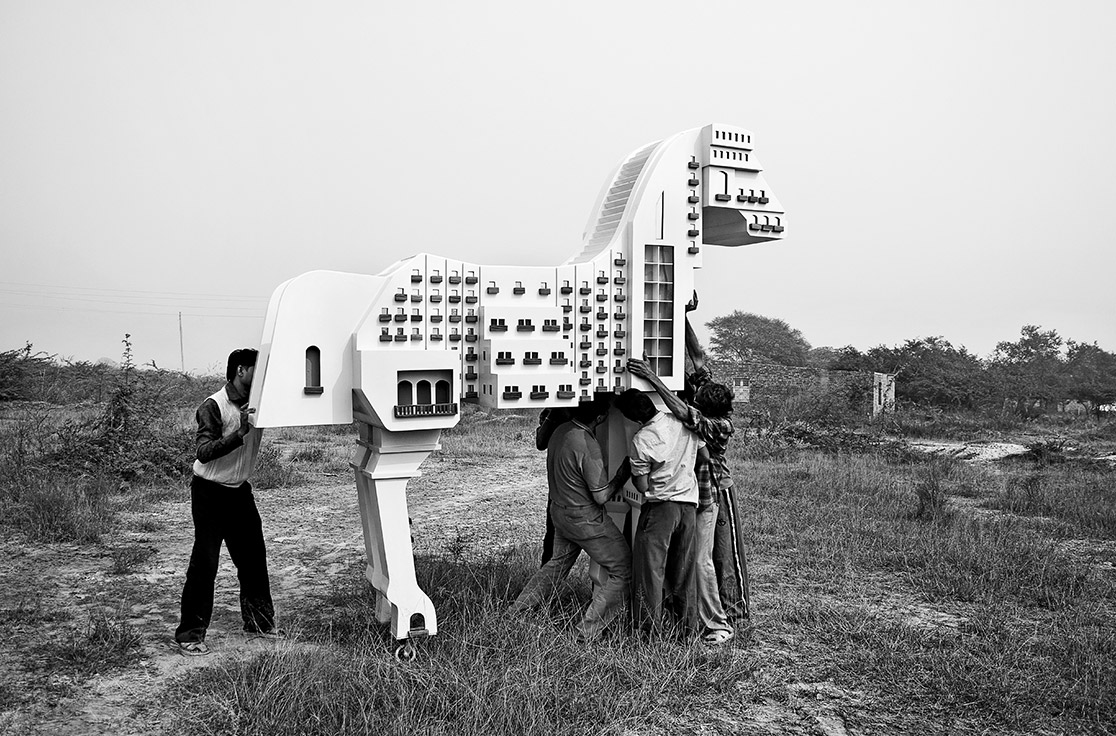 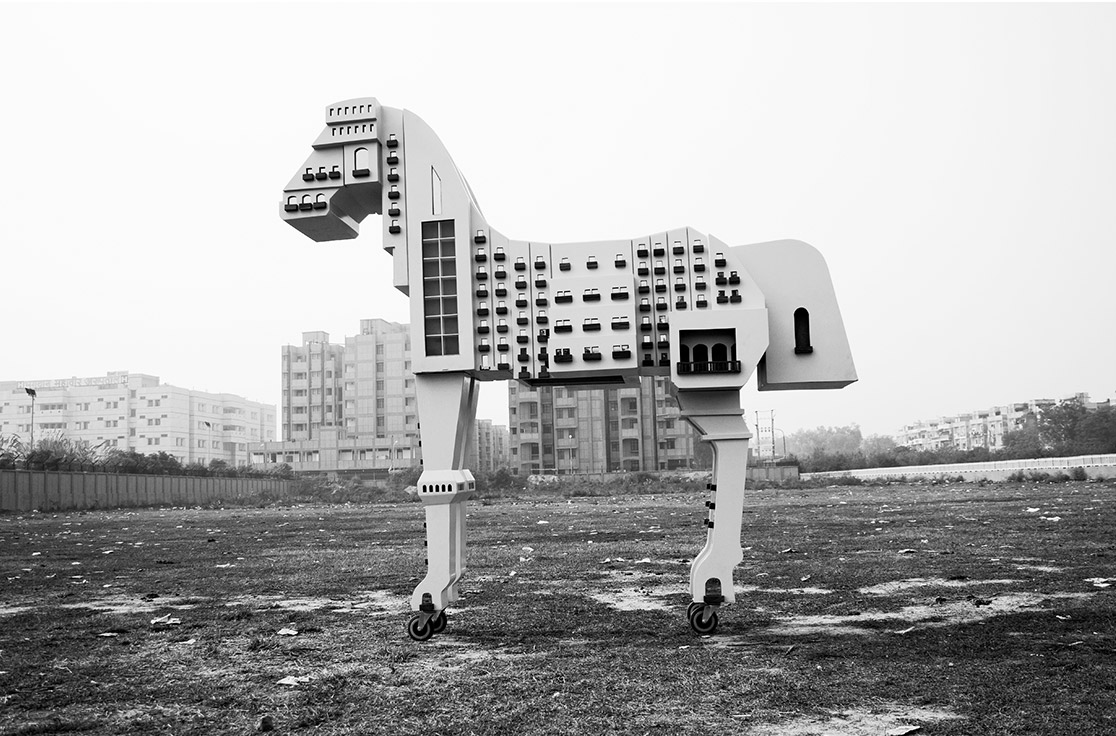 Someone left a horse on the shore

This is a large-scale sculpture made of wood. The idea of the Trojan horse is used to narrate the present day reality. After it was made the sculpture was taken to different locations on the outskirt of the city Delhi, and was photographed with the surrounding landscape. It was a comment on the every day expansion of the cityscape with the force of huge land mafia network in the city. A betrayal and conquest in contemporary times.